A friend of my husband has found this site very amusing and is telling everyone at his work about it. Now my husband is at the wrong end of a bunch of silly jokes and pranks. Because he has a big heart and opens his home to ones that others might find 'broken' or misfits and allows me to be myself and care for these animals(which comes as natural to me as breathing) and because he is a decent human being with love and compassion. This site has been a great outlet to me, and has allowed me to share these four dogs with others who might have an interest in their stories.
My husband can laugh it off. He is a big man. But I feel his humiliation and I am hurt that I have caused this, by simply trying to help these little fellows. Honey, I am sorry, and I thank you for who you are, and for loving me enough to let me be who I have to be, and letting me do what I have to do, and not trying to change me.
Toothless old, crippled Jack loves you, little blind Trevor loves you, you know Timb & Tuck, me and the kids love you. Thank you, and shame on those who are giving you a hard time.

By the way- if anyone wants to send their dog rescue photos to Buster at jmacks@alltel.net
I'm sure he would love to see them. He is a dog lover himself. ;0)


Tracker Jack- the continuing digest of a PuppyMillrescue Chapter 7


I took Tracker Jack back to the veterinarian's office to have his Distemper combo shot today. She confirmed that he does have ring worm, a fungus that causes skin problems and can be contagious. I have been treating him for that so already he has shown marked improvement. It took the test nearly two weeks to show results.
He has done really great today. On our way to the vet we stopped in to our insurance agents office and I took him inside, for a minute. He was a wonderful ambassadog, as we explained what Puppymillrescue is all about.
Posted by Elaine at 1/23/2004 09:32:00 PM No comments:

Tracker Jack- the continuing digest of a PuppyMillrescue Chapter 6

Yesterday I moved my computer from the basement up to my daughter's old room. It is much more comfortable up here.
Last night I went downstairs to heat a cup of tea for 2 min in the microwave and by the time I got back upstairs(only 2.5 min later) Jack was in a panic! The other pups were up here with him and everything was fine, but the psychological damage of what has been done to him is just beginning to surface.
I suppose in his mind, when I went out of sight I was abandoning him forever. I wish there was a way I could make him understand, that he will never be left forever again.
He went to sleep looking at me, with that precious little tongue sticking out, and my hand on his back.

To get him to rest in his new bed I have to put my PJ's in there. Now this is his devotion and attachment after only 11 days!
He looks good this morning, alert and toddling along behind my every step, on his little wobbley legs.


Tracker Jack- the continuing digest of a PuppyMillrescue Chapter 5

We had Jack's follow up Vet visit yesterday. I am still a little unerved by it. I get nervous when I care so much.

He was able to have his Rabies, and Bordatella vaccines today but she wanted to split the vaccines so he will have his DHLP-PV Friday.

She gave him one dose of Revolution (the flea and heart worm prevention) to help with his skin and ears, just in case he has mites.

Now the heavy news: My Vet recommends he have a soft palate vesechia while he is under having his chryptorchid neutering. Yes- after all poor Jack has been through, he does have a retained testicle. The good news is she does not think it is too deep in his abdomen and thought she could feel it.

She thinks his quality of life would be so much better if he had his elongated soft palate shortened. He actually 'snorkels' and sounds like he is choking a lot from this. I think it also contributes to all that tongue slipping he does. We thought it was due to the bad tooth, but he is still doing it just as much, even though the tooth has been pulled.
The surgeon specialist (Upstate Vet Specialist) quoated 800-900.
My Vet has only done one, and thinks she could do a good job, for about 450. These quotes do not include the neutering surgery.

I went ahead and set up an appointment for his neuter for next week, nothing else. I want whats best for Jack, but it scares me to think of the surgery, and it scares me to think of not doing it.
My husband and I have discussed this at some length and we really feel like Jack is too frail to undergo the SP surgery right now. He is a very fragile old fellow.
After reading that article, 'IF' it was done, I agree with Linda, I feel it would be best to have a specialist do it. My Vet had said that there is a danger of shortening the palate too much, and causing food to slip in the wind pipe. That would be diastrous.

I spoke with my Vet about Sassy Pants and Jack falling asleep when you hold them, and she said it could be a submissive response. My opinion is, that things have been so bad for them, that when they are thinking something is going to happen, they 'zone out', sort of like taking their minds away from the circumstances
.
He was an excellent patient and everyone made a big fuss over him.

He is doing so much better, but he has had a tough life and still has a long road to recovery.

Today I took a nap on the couch, I had a pup at my feet, one over my head, one on the back of the couch and Jack asleep in my arms. If I think too hard about what has happened to Jack, I get so upset, I can't think about it. I just have to get down to the business of taking care of him and bringing him back to health and happiness.

Tracker Jack- the continuing digest of a PuppyMillrescue Chapter 4

Jack's breathing has been louder today and he has not had as much energy as yesterday. He does not rest well unless he is in my arms. I think he likes nothing better than to sleep in my lap, trusting me enough to watch over him, even with his belly side up. As you probably know this is a dogs most vulnerable position. An enemy could easily disembowel them if they caught them laying on their backs this way.

I have wondered how Tracker Jack ate at the puppy mill. Here I crush his medicine and put his drops in canned pumpkin, peanutbutter, Iams canned lamb and rice and other tidbits to make it tasty. I am adding Nutridrops also. It needs to be a certain consistancy in order for him to eat it with no teeth.


Tracker still is a little wobbley on his feet, especially on slick floors. Sometimes he would rather play laying down!

Tomorrow we return to the Veterinarian to see how his Pneumonia is and hopefully be able to plan his vaccinations, neuter, and get started on heartworm prevention.

I plan to give him a medicated bath in the morning. We won't know for another week if his skin has ringworm. His coat especially on his head, is starting to feel a lot thicker. The baking soda bath worked wonders on the puppy mill smell and it has not returned.


Trevor and Tracker swapping TAILS on what it is like to be rescued! 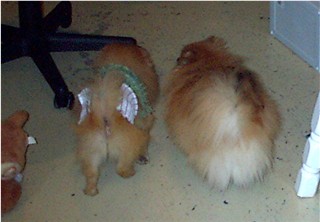