Jack in his new sweater

It has been interesting seeing Timber, Tucker, and Trevor interact with Tracker Jack. They are much nicer than people when it comes to accepting those that are needy and weak.
Timber was especially interested in seeing where Tracker Jack had his tooth pulled.

They enjoy playing together.


I look forward to posting pictures of T. Jack in a few months so all can see the difference that love makes.
Here are little blind Trevor's before pictures and now several months later. His hair now touches the ground on his tummy and backside.
BEFORE

Tucker has just kind of ignored Tracker Jack and pouted ever since his human sister Jenny went back to school.


He just kind of lays around feeling sorry for himself.

Tracker Jack- the continuing digest of a PuppyMillrescue Chapter 3

Little Tracker Jack is on my lap on a dryer warmed blanket I picked him up on. He gets cold easy. His feet seem to stay cold.
He follows me every where.
We worked on the steps yesterday. He did one up all by himself.
He barks at his reflection in the glass doors. It is so cute!

I went shopping yesterday and bought four fleece oval cushion beds and four new toys. When I came in a scattered them all on the floor and it was so funny watching them run and hop in each bed and shake and grab the toys. I got small soft ones that Jack can pick up.


He reminds me of Linda Landers little 'Happy', her little beautiful Pom that she rescued from the puppy millers that had cut her ears off.
He watches me with the most adoring eyes and even though he kind of gets stiff as you are picking him up, he loves to be held. It is so hard for me to understand why he would be so sweet when he was so mistreated.
I was told he came from a dark, stinking, windowless, building that had cages about 3'x3' with six or seven dogs in each box. They were just standing all over each other. The miller would reach in and grab them by any body part she could get a hold of and pull them out. There was a dumpster like thing close by- we can only imagine what she must have thrown in there.

He has run and played and barked with little blind Trevor this morning. They have had a wonderful time. Jack is feeling so much better.


The most remarkable thing happened last night. I was putting an extra blanket down in his bed and was on my knees straightening it out. As I was talking to him and telling him I never wanted him to be cold again, he walked over and gave me three little butterfly kisses on my cheek. I was so surprised I began to cry. Even my husband got all teared up. It was amazing. It was as if he knew everything I was saying to him.

Tracker Jack- the continuing digest of a PuppyMillrescue Chapter 2


This has been an emotional day for me. I am having a battle inside to get over the anger I feel at what had been done to Jack at the puppy mill. Thank God for PuppyMillRescue!

Yesterday at the Vet, one of the first things the technician noticed was the scarring in the shape of a handprint on the pink skin of his back. As if he had been grabbed numerous times by the millers by just his little body.


His rattley chest was diagnosed as Pneumonia.
He was able to have the awful tooth pulled. The actual tooth was very tiny, but the plaque built up on it made it look like a sharks tooth.
He seemed to have some type of fungus on his skin, probably due to exposure and filth.
He was given a dewormer which produced plenty of results this morning!


Both of his back knees are luxating patellas, and he has a bad front knee.


When giving a pill the Vet noticed that his palate is elongated and during times of stress covers his trachea, cutting off his oxygen causing him to become lifeless and his tongue to turn blue.

While I was cleaning the black gunk out of his ears, he became limp and I thought I was going to have to take emergencies measures to keep him alive. This was the case for the Vet while they pulled his tooth. I think it may have scared them too.

The good news is- he does not have heartworm, the knees and pallet can be surgically fixed, he was given antibiotic for the pneumonia, and a special shampoo for the fungus, plus an antacid for the stomach problems and other medicine to help with the bloody stools.
Right now poor little Jack is taking several medications twice a day. What a brave strong little boy he is.

Tracker Jack- the continuing digest of a PuppyMillrescue


My mother drove me all the way to Murrells Inlet, SC to meet with Cindy and Donna of PuppyMillRescue. They were carrying precious cargo from South Port, NC. 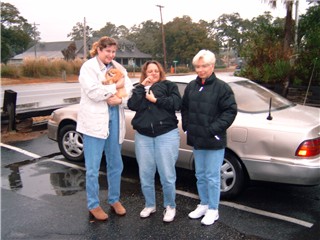 I call him 'Tracker Jack', sort of like the yummy snack, Cracker Jack.

Tracker lived his whole life in a wooden box at a NC puppymill. His backside was so caked with feces when Cindy got him, that he could not even defecate. When she got him cleaned up, his poor bottom was totally red and raw. He had been cared for in rescue at least 3 weeks by the time I got him.

His backside is much better now.


I am not sure what I was expecting, but I think I thought he would be shy, unsociable, and sullen after all his abuse. Boy- nothing could be further from the truth!
What he is on the outside is very different from the lovely little boy on the inside.

Jack has a really bad infected tooth with infection reaching into the nasal passages. He also has a 'rattley' chest. My Vet can't see us until Monday so I started him on liquid Amoxil for the infection. He had earmites so I went ahead and put Eridamite in his ears.


Here is that awful tooth!


I also bathed him in a 'smell good' shampoo and soaked him in a warm baking soda bath. That helped with the strong unmistakable puppymill smell.
He has dark purple patches on his skin underneath the very coarse, sparse hair, possibly a fungus.


His nails are dead looking and the ends of his paws dark.

I would not be surprised a bit if he was heartworm positive, one of the other mill pups tested positive.
He has trouble breathing and his tongue is really bluish purple with some congestion in his chest. One good thing-he has not coughed. So he may not be too heavily infested.

Now on to his real self-
'Tracker Jack' is the happiest, sweetest, most lap loving baby. He is full of energy, spunk, nothing seems to scare him. He has taken right up with the other guys. There has not been a single growl or lifted lip!
You should have seen Jack and Timber running in the back yard just now! I am guessing he is not older than 8. It is his pitiful mouth that makes him seem older.

I am going to have to put him in his crate in a minute because he is so happy running around checking everything out that he is getting winded. When he is not worrying with that tooth he looks at you with the most bright intelligent eyes, and smiles.

He is smaller even than Trevor, probably 5 lb. but he is stouter than he looks. When you pick him up you are surprised he is as heavy as he is. I am so glad he came to us. He and Trevor are playing now- finally someone to play with Trev! They look like little brothers.