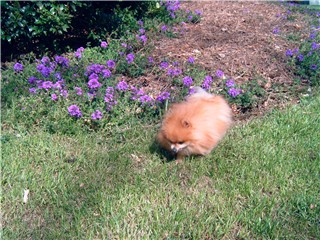 Jack running in the back yard

He was happily snoring away on his bed under my computer desk when I sensed something was wrong. He was standing frozen, eyes glazed, right below my chair. I lifted him up and he was just frozen, his eyes didn't blink and his tongue was turning blue. I reached and tried to pull his tongue forward to relieve the seal he had made over his trachea and let his air flow continue. The move seemed to wake him and he began to move and breath normally again.

I had no idea what might have brought that on, but I held him close for a long time and watched him carefully. As I was holding him I imagined what I would think if he were to die. I would be devastated, but I would also be so glad that I was the one who held him, who had loved him, who had made his last days happy. I would have been able to let him go in peace knowing I had given him everything I possibly could.

However- I am very glad to say that he is doing fine and seems stronger by the day, with no recurrence of the seizure.
The "Tracker Jack in the Box, a Story of Puppy Mill Rescues" is written. It is just a matter of getting it in the 'print on demand' format and getting it downloaded. This printed book will have to be in black and white with the only color pic being the front cover.
It is so important to get the word out about puppy mills and rescue. I drive myself because I know once I stop, it is hard to get started again.
Posted by Elaine at 4/24/2004 09:41:00 PM