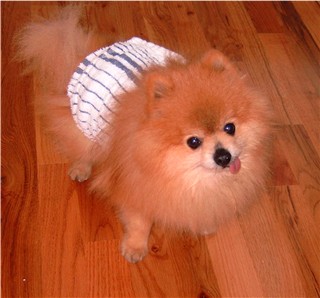 My sister came to visit me and met Tracker Jack today for the first time. He has been with us three weeks today.
He ran behind a wall when he saw her come in. Then I picked him up - and he would not look her in the eyes, trembling with fear.
I held him close as he relaxed and then I showed her the scarring of the hand print on his back, his dead toe nails, sparse dry hair, the black skin from the fungus on his feet and his ears.
I told her the story that the dog rescuers had told me of the puppy mill; the dark building, filthy, stinking boxes, full of dogs, standing in their own waste, all begging to be taken.
Then I told her that I was thankful for Tracker Jack's condition, as the rescuers had chosen the weaker sick looking ones, in hopes that they could save them, and possibly keep them from being thrown in the big green metal container.
Jack just looked at us as we talked, with that sweet, all knowing expression. His little cute tongue sticking out as always. He is alive. He made it. He has made it through his surgery. He has made it HOME.
We have to do more to see to it that more get out. That more of the puppy mill dogs get home where they are safe and loved.
Posted by Elaine at 1/31/2004 07:55:00 PM 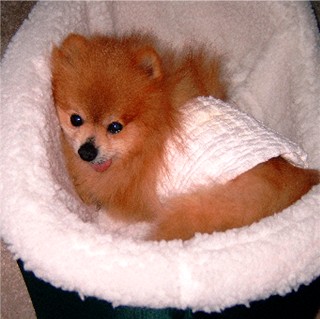 Tracker Jack has had his surgery!

Jack is now back home from the veterinarian's office.
We felt he was strong enough to go ahead and have the neuter, because he has been doing so well.
I dreaded it and am really glad we went and got it over with. This should be the end of all his trauma for a long time (forever I hope). He is doing great and is very alert and sleeping on his bed right now.
The Veterinarian called and he was awake standing in his cage and by 10:30. I was able to pick him up after lunch. This is amazing considering I just took him at 8:30.
It is a good thing we did not schedule the palate surgery, as when she had him under anesthesia and was able to get a good look in his throat, his palate was not as long as first thought.

However he has lots of folds of tissue in the back of his throat, as though he has had some kind of trauma to that area. My thoughts are: either someone had attempted to debark him with a rod, or years of breathing filthy, stagnant air in that small box in the puppy mill had built up scarring on the tissue. It is also a possibility that recurring untreated kennel cough or pneumonia might have contributed to this also.

Dr. Hurlbert had to perform the surgery with him on his belly working upside down in order to keep his oxygen going. He was able to have just one incision and she was able to move the abdominal testicle out through that incision.
Dr. Sue Ann Hurlbert is amazing with what she can do with her tiny hands on these little guys.
He has shown some swelling in the areas of the site of the anesthesia and the surgery but she has given him some anti-inflammatory for this.

I paid to have him micro chipped, so if he is ever lost he can be scanned and it will show that his home is with us. Tracker Jack has embedded himself in our hearts and we want him safe and well. 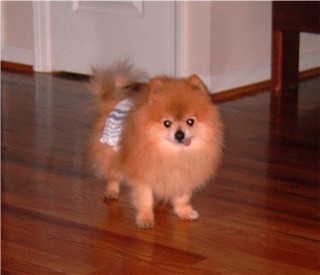 Little blind Trevor and Tracker Jack are getting to be good friends. It's like they understand the bond of being a rescue. 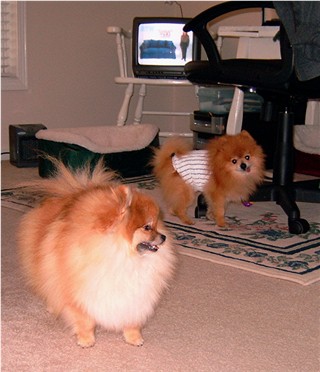 This morning I forgot to move slowly and I reached to pick Jack up from behind with out warning him. He gave an awful yelp, as he thought someone was going to hurt him. Poor boy, I don't have any idea what he has been through.
I gave all four of the pups medicated baths yesterday. The special shampoo must be left on for ten minutes. It was quite a challenge trying to keep them warm and sudsy at the same time.

Trevor fluffed up beautifully and I just had to take his picture. 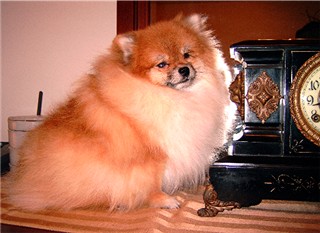 Tracker Jack- the continuing digest of a PuppyMillrescue Chapter 8


He wagged his tail!!!
Tracker Jack stood there and looked at me and there it went back and forth, back and forth, then stopped. I reached down and gently picked him up trying hard not to cry.

This was the first time I had seen this little boy actually wag his tail. I suppose life in a puppy mill doesn't give you much practice at tail wagging.

It is a funny little tail. Almost hairless on one side with dry brittle hair on the end. Poor nutrition and filthy, damp living conditions have taken a toll on his poor little body, including his tail.

I never thought I would get so excited, or much less write about such a simple thing as tail wagging, but then again, I had never had a puppy mill rescue.

We plan to give Tracker Jack plenty to wag his tail about from here on out.

It is snowing and sleeting outside. Here we are all warm and dry safe inside. Yet I can't help but wonder about those that are less fortunate. Whether they be man or animal. I pray God will give them comfort in whatever their conditions are, and I thank Him for the comfort we feel.